25 points, due Friday Feb 26th by 10PM Central time. Like all assignments, there is a 48-hour, no questions asked extensions policy. If you have a tech issue, a health issue, or some other issue that impedes making the deadline, use this policy. You need to notify me that you’re using the policy. Extensions beyond the 48-hour policy will only be considered in extenuating circumstances, and circumstances that arise between the original deadline and the extension are generally not extenuating - the deadline is still the deadline, not 48 hours later.

To implement a particular tree structure and use it to store words and counts. You’ll generalize some of the ideas that you’ve been learning about trees to a slightly different tree structure. Also to practice recursion on trees.

This is a homework assignment that you’ll be handing in on Moodle.

You’re welcome to either complete this homework with input from one or more members of your collaborative learning group or to complete it on your own. You and the other members of your collaborative learning group should each write your own code, even if you’re helping one another, but you may share your screens look at one another’s code, make suggestions, and compare ideas. Take a look at the Collaboration Policies document on Moodle if you have any questions about what’s permitted.

Open the HW 7 Project on Repl.it. You should follow the same process of downloading your files and uploading them to Moodle to submit your homework.

In this assignment, you’ll be implementing a tree structure to count words that will store the words using somewhat less memory than a binary search tree. The start files include a Java class called WordCloudMaker.java (originally written by Sherri Goings, with a few modifications by Jeff Ondich and Anna Rafferty - thanks for sharing!), some other helpful pieces of code, as well as a sample book (WutheringHeights.txt) and a stopwords file described below.

Create a file Collaborations.txt and put in any collaboration with your learning group or references to outside websites.

What is a Word Cloud

You’ve probably seen word clouds like the one below generated from Hound of the Baskervilles by Sir Arthur Conan Doyle:

The neat thing about word clouds is that words are displayed in a size proportional to the number of times they are used in the text on which the cloud is based. (Note that very common words, also known as stopwords, are typically not included in the cloud. Otherwise, all English word clouds would be dominated by “the”, “and”, “a”, “in”, etc.) In this assignment, you’ll implement a particular type of search tree to count words and their counts in text, allowing you to make your own word clouds.

First you’ll build a WordCountTree class to hold your words and their counts. Your WordCountTree will be a particular kind of tree. Each node except for the root will represent a character as well as a count. The children of a node will be characters that could come after the current character to represent a word. To find a word, you’ll work down the tree until you reach the final character in the word, and then look at the count for that node. For example, imagine that we had a (very short) book that had the following words and counts: 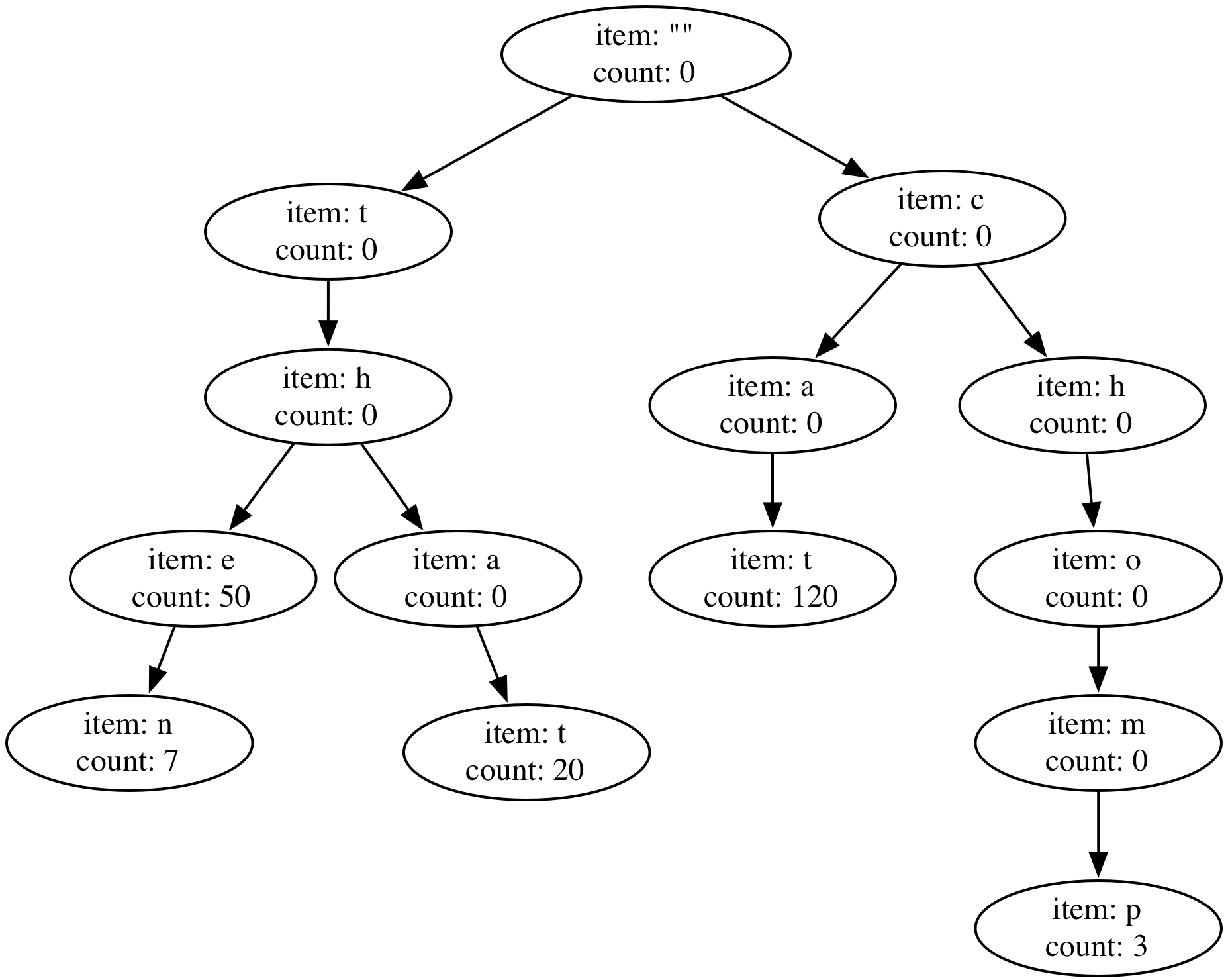 To trace down the tree to find “the”, you would follow the steps:

There are a couple of things to note about this tree:

You’ll find a Node class inside of your WordCountTree class like we usually do with trees. You must directly create your tree stucture, though you may use Java implementations of other data structures such as Lists to support your implementation.

Remember that characters are a primitive type in Java:

Your WordCountTree must have the constructor and methods below implemented and with properly styled JavaDocs method comments; it may also have any other methods of your choosing.

You’ll note that WordCountTree uses a class called WordCount, you should also implement this small class:

For the methods above that must be recursive, it’s fine for each one to call a helper method where the recursion actually takes place, and it’s also fine if your method implementation includes some loops, as long as there is recursion as well. (Frequently, you might loop over the children while changing levels in the tree recursively.)

As always you should test your code as you implement each method. For each required method in WordCountTree you must have an example of it working in the main() method of WordCountTree.java. At minimum these examples should call the method and print the results, though double checking the results would be a good additional thing to do.

In order to actually make a word cloud, we need to process a data file and output something useful. You should create a WordCounter class that can count the words in a text file and then output them in some format. WordCounter counts all of the words in the file except “stop words”. A list of stop words is included in the download of files for this assignment (StopWords.txt); your WordCounter can assume that this file is present in the same directory where it is being run.

Your WordCounter should take in the following command line arguments:

which would generate the word cloud based on the 40 most common non-stopwords in WutheringHeights.txt and output the cloud HTML to the terminal. (If the text contains fewer than 40 non-stopwords, then the cloud will just use all the words, and if some words are tied, any method of tie-breaking is fine.) Note that depending on how Repl.it is doing, processing WutheringHeights might actually take a while, so you should initially test with a smaller file.

Your WordCounter should use the WordCountTree you built in the previous part to store the words and counts. Before you put words in the tree, you should ‘normalize’ them by removing punctuation and spaces and making them lower case. You can use the following code to normalize a word (this is using a thing called regex, which we haven’t covered this term):

The HTML output by your program can be put into an online html previewer to see the (not as pretty) word cloud.

Your code will be graded on the following rubric: