This is an individual assignment. You are still able to get help from many sources as detailed in the collaboration policy.

This assignment is due on Wednesday March 2nd at 10pm. See the syllabus for the late policy.

Get practice with recursion.

Again, I recommend you complete this assignment in Olin 310, though it isn’t required to do so.

Mount the COURSES drive and remember to save everything into STUWORK. If you don’t do this, everything you write will disappear when you log out!!!!

In this problem set, you’ll get a chance to play with a visual example of recursion, but, first, one warm-up exercise. In a file called max.py, write a recursive function recMaxFinder that takes a list of numbers as an argument and returns the value of the maximum element as follows:

A fractal is an image that is composed of smaller copies of itself. When drawing fractals, you typically specify a level, which tells you how “deep” to go in drawing smaller versions of the image. In this assignment, you’ll write a recursive function to generate the von Koch snowflake: 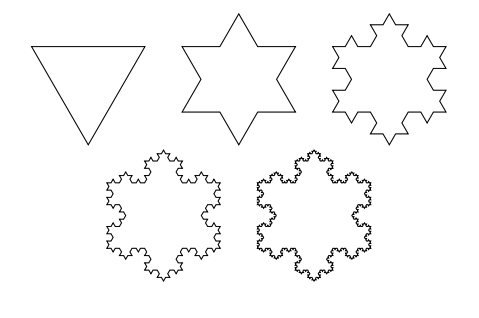 One way to think about a von Koch snowflake is as follows:

Then you repeat the exact same process on the resulting lines, and do it again, and again. The level of a fractal is the number of times that you repeat this “expansion” process.

Copy the graphics.py module into your folder. In a file called fractals.py, first copy this starter code:

The function `vonKochSegment takes five arguments: a level (the number of times that you do expansion), a starting point, a heading (in degrees counterclockwise from due east on the screen), a length of the line, and the graphics window in which to draw the resulting image. The function should return the ending point of the segment.

I’ve provided the base case when the level is 0. In this situation, the program calculates the ending point of the segment (this requires some trigonometry: go length units in the direction of the heading, which means length * cos(heading) in the x direction and -length * sin(heading) in the y direction), and then draws a line from the starting point to the ending point in window. This generates one third of a von Koch snowflake of level 0.

Remember to test your code at this point to be sure that it draws a segment correctly. For example, the call vonKoch(200, 3) should result in an image like this:

Include test code that draws von Koch snowflakes of levels 1, 2, 3, and 4 when fractals.py is run and doesn’t close the window until the user hits “Enter” (this is to make it easy for the graders, don’t make life difficult for the graders!). Make sure to choose a length value that doesn’t take too long to run but is big enough to see.

Your homework will be scored with the following rubric: